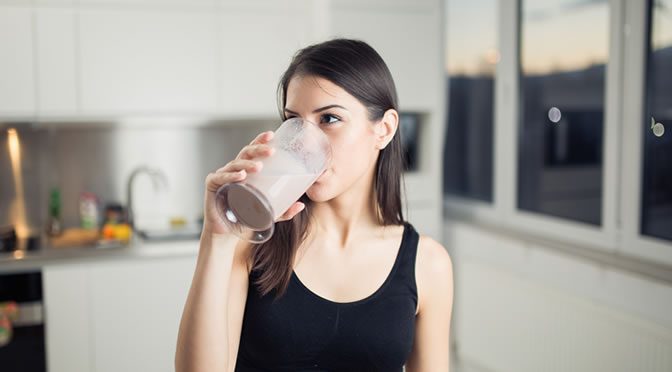 Supplementation with whey protein — a popular drink among athletes — can cut down the risk factors for heart disease and stroke.

Whey protein — which is produced from cow’s milk — is a dietary supplement commonly used to improve endurance during exercise, weight loss, strength and muscle mass.

In this study participants with high blood pressure who received whey protein shakes had lower blood pressure, lower cholesterol levels and better blood vessels with an 8% reduction in the risk of developing heart disease and stroke.

Heart disease and stroke are the top killers in the U.S.

Although drinking milk is beneficial to health, until now there has been little work to show the effect of milk protein on blood pressure.

“By giving people a high dose of whey protein, similar to the amount used by athletes, we were able to see a significant impact over an eight-week trial.”

While the control group received maltodextrin, a form of carbohydrate.

Subjects in this study drank 56g of whey protein mixed with water per day for eight weeks.

The protein shakes contributed about 214 kilocalories, which is equivalent to 10% of participants’ daily energy intake.

Therefore, the subjects were asked to replace protein with other foods in their diet.

Over the 24 hours after drinking the protein shakes, both systolic and diastolic blood pressure were reduced significantly.

There were also significant reductions in cholesterol and triacylglycerol levels.

These are types of fats found in the bloodstream that are known to elevate the risk of cardiovascular disease.

“One of the important impacts of this study is that whey protein may have a role, as part of a healthy diet, to reduce risk factors for cardiovascular disease, although further studies are required to confirm these results.”

The study was published in the American Journal of Clinical Nutrition (Fekete et al., 2016).