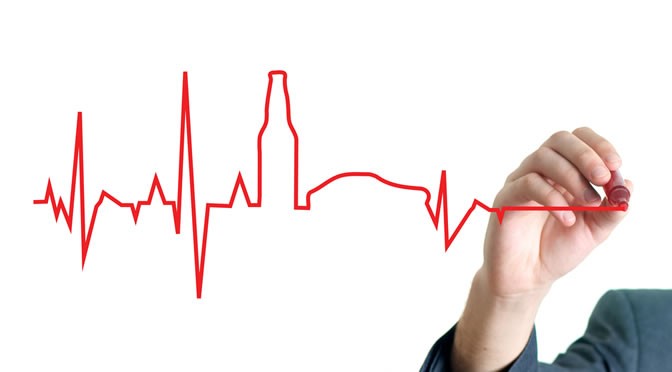 The link between alcohol intake and heart failure.

Having up to 7 alcoholic drinks a week from early to middle age has been linked to a 20% lower risk of heart disease in a new study.

“These findings suggest that drinking alcohol in moderation does not contribute to an increased risk of heart failure and may even be protective.

No level of alcohol intake was associated with a higher risk of heart failure.

However, heavy alcohol use is certainly a risk factor for deaths from any cause.”

The researchers took into account many factors that might have contributed to the link, such as age, sex, high blood pressure, body mass index and so on.

Those classified as ‘former drinkers’ in the study, though, were at significantly increased risk of heart failure, as Professor Solomon explained:

“The people who were classified as former drinkers at the start of the study had a higher risk of developing heart failure and of death from any cause when compared with abstainers.

This could be related to the reasons why they had stopped drinking in the first place, for instance because they had already developed health problems that might have made them more likely to go on to develop heart failure.”

Abstainers, though, had the same rates of heart failure as those who were in the highest bracket for alcohol consumption (over 14 drinks per week).

That said, though, drinkers in the highest bracket had much greater rates of death from any causes (47% higher risk for men and 89% higher for women).

“It is important to bear in mind that our study shows there is an association between drinking moderate amounts of alcohol and a lower risk of heart failure but this does not necessarily mean that moderate alcohol consumption causes the lowered risk, although we did adjust our results to take account, as far as possible, for a variety of other lifestyle factors that could affect a person’s risk.”