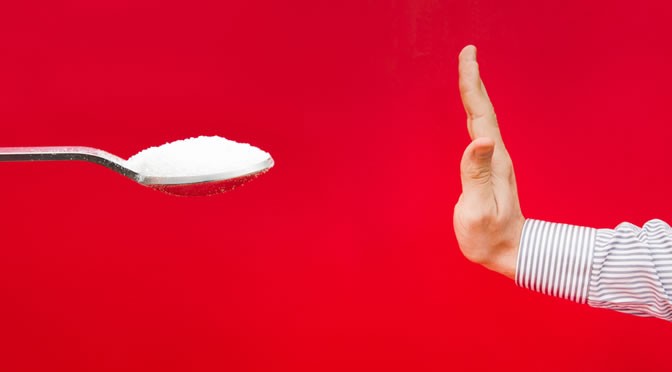 The maximum number of teaspoons of sugar that is healthy.

Added sugars — particularly fructose — are the main cause of diabetes and pre-diabetes, a new scientific review finds.

Dietary experts are now arguing that current guidelines for the maximum amount of sugar allowed in a healthy diet are too high.

The research, published in the journal Mayo Clinic Proceedings, argues there should be huge reductions in current guidelines which allow up to 25% of daily calories in added sugars (DiNicolantonio et al., 2015).

“At current levels, added-sugar consumption, and added-fructose consumption in particular, are fueling a worsening epidemic of type 2 diabetes.

Approximately 40% of U.S. adults already have some degree of insulin resistance with projections that nearly the same percentage will eventually develop frank diabetes.”

Fructose is particularly bad for you, studies suggest, because it has a negative effect on both insulin resistance and the body’s overall metabolism.

Other sugars without fructose do not have nearly the same detrimental effect.

While American guidelines for added sugars allow up to 25%, the World Health Organisation currently recommends levels of no more than 10%, with proposals on the table to reduce this to 5%.

This 5% level translates into about six teaspoons (24 grams) of sugar per day for women and up to nine teaspoons (36 grams) for men.

Fructose is found naturally in whole foods like vegetables and fruits, but these are positively good for human health.

Ideally, added sugars in the diet should be replaced with those naturally occurring in fruits and vegetables.

The study’s authors conclude that at…

“There is no biological need for any added sugars in the diet, particularly those containing fructose (eg, sucrose and HFCS).

At an individual level, limiting consumption of foods and beverages that contain added sugars, particularly added fructose, may be one of the single most effective strategies for ensuring one’s robust future health.”

No sugar image from Shutterstock