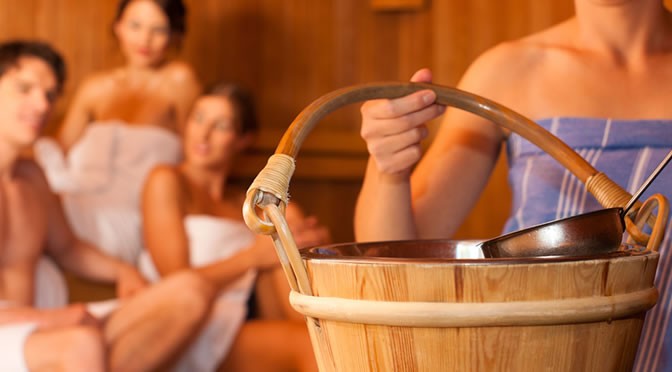 The health benefits of saunas revealed by large Finnish study.

Men who take regular saunas have up to a 63% lower risk of dying of as a result of heart problems, a new study of the benefits of saunas finds.

Whether it’s because saunas are relaxing in themselves or because they are a sign of a leisured life, the study finds a strong link.

The men were followed up after almost 21 years, during which time 929 had died, mostly of cardiovascular or coronary heart disease.

Among those who took between 2 and 3 saunas a week, though, the risk of cardiovascular disease was reduced by 27%, going up to 50% for those who had a sauna almost every day.

Similar figures for the benefits of saunas were seen for coronary heart disease and for deaths from all causes.

The biggest drop was in the risk of sudden cardiac death, where a sauna almost every day dropped the risk by 63%.

The researchers found it wasn’t just the amount of saunas that men took, but also their length.

Saunas averaging over around 10 minutes provided the biggest reduction in risk of dying.

The health benefits of saunas have been previously linked to better circulatory and cardiovascular function.

This is the first study, though, to find this link between saunas and cardiovascular problems.