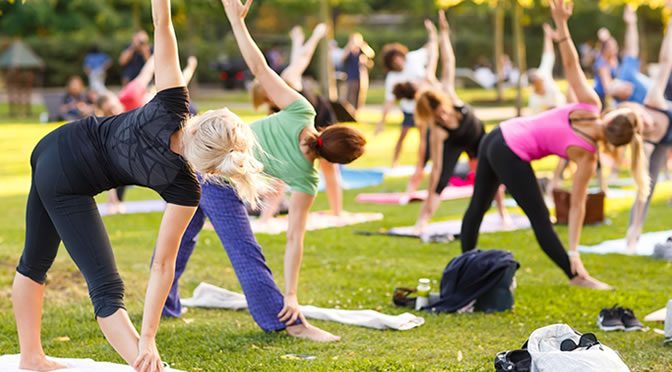 The benefits of yoga include reduced inflammation in the blood caused by stress and the aging process.

Women who routinely do yoga have lower cytokine interleukin-6 (IL-6) levels in their blood, even after stressful experiences, new research finds.

Interleukin-6 are small proteins that act as pro and anti- inflammatory agents and are involved in metabolic regulation, infection responses, regenerative and neural processes.

High levels of interleukin-6 in the blood has been linked to type 2 diabetes, arthritis, heart disease, stroke and wide range of age-related disorders.

“In addition to having lower levels of inflammation before they were stressed, we also saw lower inflammatory responses to stress among the expert yoga practitioners in the study.

Hopefully, this means that people can eventually learn to respond less strongly to stressors in their everyday lives by using yoga and other stress-reducing modalities.”

In the study, women were divided into two groups:

Their mood and anxiety levels were measure by completing questionnaires and psychological tests and blood samples were taken throughout these two weeks.

To elevate their stress levels, they had to perform a number of tasks such as putting their foot into very cold water for one minute and then solving a series of difficult mathematics problems.

After these stressors, participants either practiced yoga, walked on a treadmill or watched a neutral, boring videos.

The analysis of participants’ blood samples showed that women who  were labelled “novices” had a 41% higher level of pro-inflammatory cytokine IL-6 compared to the  “experts” group.

“In essence, the experts walked into the study with lower levels of inflammation than the novices, and the experts were also better able to limit their stress responses than were the novices.”

Professor Ron Glaser, one of the study’s co-authors, said the study offered some clear benefits of yoga:

“We know that inflammation plays a major role in many diseases.

Yoga appears to be a simple and enjoyable way to add an intervention that might reduce risks for developing heart disease, diabetes and other age-related diseases.

This is an easy thing people can do to help reduce their risks of illness.”

Professor Bill Malarkey, another study co-author,  pointed out that one of the consequences of aging is inflexibility:

“Muscles shorten and tighten over time, mainly because of inactivity.

The stretching and exercise that comes with yoga actually increases a person’s flexibility and that, in turn, allows relaxation which can lower stress.”

After all, he made a point that as a clinician:

“Much of my time is being spent simply trying to get people to slow down.”

The study was published in the journal Psychosomatic Medicine (Kiecolt-Glaser et al., 2010).