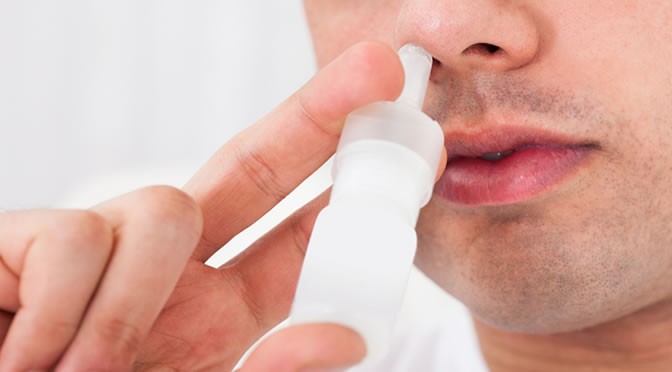 Drug known as a ‘love hormone’ has been shown to reduce calorie intake in men.

A nasal spray containing the ‘love hormone’ oxytocin has been shown to reduce calorie intake in men.

Researchers have found that the nasal spray reduced the number of calories subsequently eaten at breakfast — whether men were overweight or not.

It also improved metabolic measures, such as insulin sensitivity.

This allows the body to better clear glucose from the bloodstream.

“Our results are really exciting.

Further study is needed, but I think oxytocin is a promising treatment for obesity and its metabolic complications.”

Twelve of the men were overweight, while the remaining 13 were at a healthy weight.

Half received a placebo, while the other half got a single dose of oxytocin.

The men did not know who had received what.

One hour later the men were given breakfast, which contained twice as much food as normal.

The researchers measured how much they ate.

They found that men who received the spray ate 122 fewer calories and 9 grams less fat.

The oxytocin also seems to increase the body’s use of fat as a fuel.

Oxytocin is approved for use in Europe but currently only for clinical trials in the US.

It is not yet known how oxytocin works, since people self-administering the spray did not feel their appetite was reduced.

The drug has a sex-specific effect so will also need to be studied in women.

The study was also carried out over only a short time so it’s not evidence that it would continue to work and restrict calorie intake over an extended period.

The study was presented at the Endocrine Society’s 97th annual meeting in San Diego.