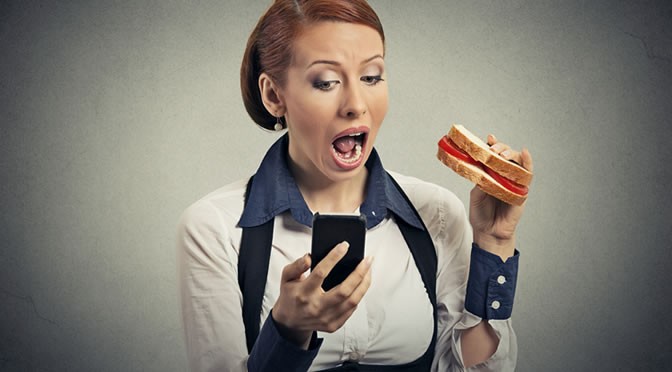 Healthy eating isn’t just about what you eat, it’s how you eat.

Distractions such as watching TV and to a friend while eating make weight watchers eat more later in the day, a recent study finds.

But the worst of all distractions is walking around while you are eating.

Researchers from the University of Surrey in the UK studied a group of women to estimate the impact of different types of distractions on future food intake.

They had to eat a cereal bar under one of three different conditions.

The third group sat with a friend and had a chat.

Afterwards they were asked to take a taste test and rate how they liked the sample foods presented to them.

They were allowed to “eat as much as you like”.

The test samples were bowels of carrot sticks, chips, grapes, and chocolates.

Women who had eaten their cereal bar while walking ate more and sneaked chocolate 5 times more than the other groups.

Professor Jane Ogden, the lead author of this study, explained.

“Eating on the go may make dieters overeat later on in the day.

This may be because walking is a powerful form of distraction which disrupts our ability to process the impact eating has on our hunger.

Or it may be because walking, even just around a corridor, can be regarded as a form of exercise which justifies overeating later on as a form of reward.

Even though walking had the most impact, any form of distraction, including eating at our desks can lead to weight gain.

When we don’t fully concentrate on our meals and the process of taking in food, we fall into a trap of mindless eating where we don’t track or recognise the food that has just been consumed.”

This study was published in Journal of Health Psychology (Ogden et al., 2015).