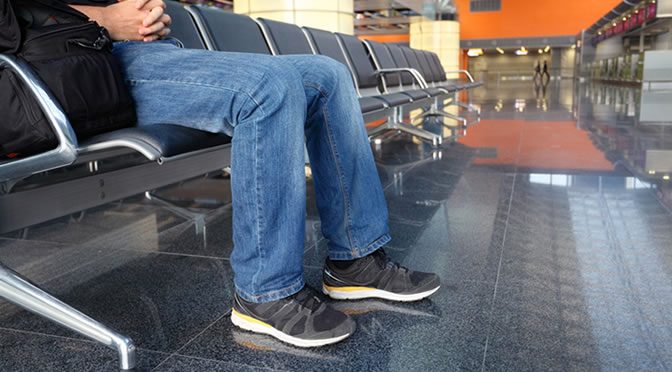 When walking is not an option, this is a handy way to combat heart disease.

Reduction in blood flow to the legs is a factor in developing heart disease and this can be due to sitting over a long period of time.

However, new research suggests a simple solution: fidgeting with the legs while sitting.

This protects the blood vessels in the legs and so helps prevent artery disease.

Dr Jaume Padilla, the lead author of this study, said:

“Many of us sit for hours at a time, whether it’s binge watching our favorite TV show or working at a computer.

We wanted to know whether a small amount of leg fidgeting could prevent a decline in leg vascular function caused by prolonged sitting.

While we expected fidgeting to increase blood flow to the lower limbs, we were quite surprised to find this would be sufficient to prevent a decline in arterial function.”

For the study, participants’ vascular function in the legs was compared before and after three hours of sitting.

They were asked to keep one leg still and fidget with the other leg every now and then by taping the foot for one minute and then letting it rest for four minutes.

The average movement of the feet was 250 times per minute.

Thereafter the blood flow of the artery in the lower leg was measured.

The researchers recommend the tapping exercise should be used for both legs to optimize the benefits.

Remember, though, that this is not a replacement for walking or any other exercise.

It is clear that we get much higher cardiovascular benefits from walking and exercise in general.

“You should attempt to break up sitting time as much as possible by standing or walking.

But if you’re stuck in a situation in which walking just isn’t an option, fidgeting can be a good alternative.

Any movement is better than no movement.”

The study was published in American Journal of Physiology – Heart and Circulatory Physiology (Morishima et al., 2016).