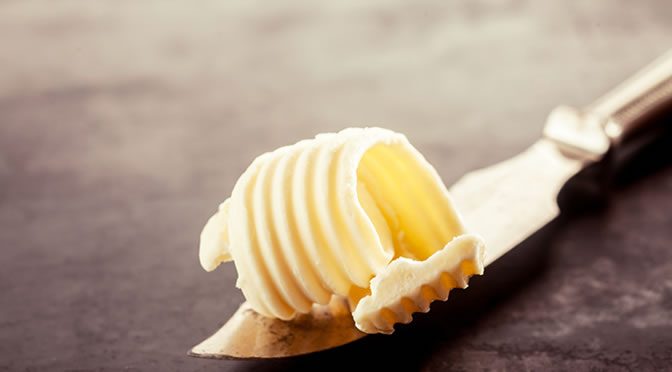 Eating butter has no link with heart disease or death and may also have a protective effect against diabetes, new research finds.

The belief was that since the common spread is high in saturated fats, it increases heart-associated problems and the risk of other chronic health conditions, such as type 2 diabetes.

However, this study revealed that daily servings of 14 grams of butter (one tablespoon a day) has no associations with heart disease, diabetes and total mortality.

The researchers  suggest that butter is a more nutritious option than even potatoes and white bread and it shouldn’t be demonised.

Dr Pimpin, the first author of this study, said:

“Even though people who eat more butter generally have worse diets and lifestyles, it seemed to be pretty neutral overall.

This suggests that butter may be a “middle-of-the-road” food: a more healthful choice than sugar or starch, such as the white bread or potato on which butter is commonly spread and which have been linked to higher risk of diabetes and cardiovascular disease…”

The researchers analysed nine relevant studies including 15 country-specific groups representing 636,151 individuals, with a total of 6.5 million person-years of follow-ups.

Overall, the review of these studies and analysis of the medical databases found no link between daily servings of butter and cardiovascular disease, diabetes and all-cause mortality.

Professor Dariush Mozaffarian, a senior author of the study, said:

“Overall, our results suggest that butter should neither be demonized nor considered “back” as a route to good health.”