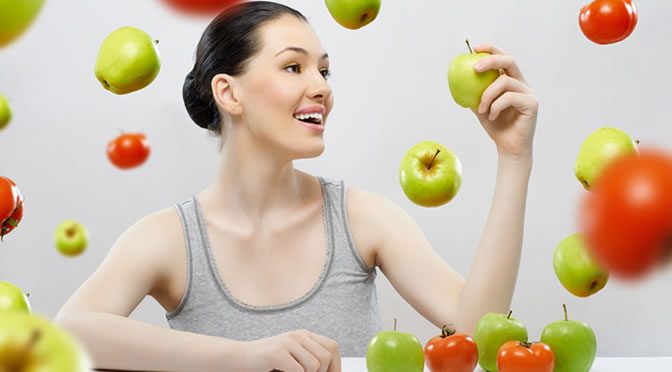 Improving your diet can always have physical health benefits, but it can also enhance your mood.

People’s happiness can increase enormously when eight portions of fruit and veg are added to their everyday diet.

Traditional findings concentrate on the effect of fruit and veg on reduction of cancer risk and heart disease, but a new study examines psychological wellbeing  instead.

For this study 12,385 Australian adults were randomly selected and their psychological well-being was measured.

Participants who changed their fruit and veg intakes from none to eight portions a day showed an increase in life satisfaction equivalent to that gained by getting a job.

In this study, within two years of improving their diets, people showed huge positive psychological benefits.

Professor Andrew Oswald, one of the author of the study said:

People’s motivation to eat healthy food is weakened by the fact that physical-health benefits, such as protecting against cancer, accrue decades later.

However, well-being improvements from increased consumption of fruit and vegetables are closer to immediate.”

Dr Redzo Mujcic, the other author of the study, said:

“Perhaps our results will be more effective than traditional messages in convincing people to have a healthy diet.

There is a psychological payoff now from fruit and vegetables — not just a lower health risk decades later.”

The authors concluded that a diet rich in fruit and veg not only enhances long-term health benefits, but also suggests that people will benefit within two years from an increase in happiness and life satisfaction.

The study was published in the American Journal of Public Health (Mujcic & Oswald, 2016).