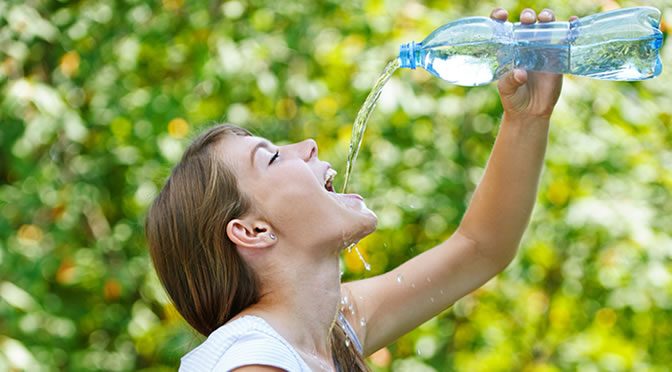 We often hear that we need to drink water for our health — perhaps even 8 glasses a day — but a study challenges this popular health tip.

When we lose fluids our brain uses a mechanism called ‘thirst’ which leads to craving for fluids.

This basic instinct results in a pleasant experience when drinking water but after reaching the point of satisfaction, if we continue to drink water, it turns into an unpleasant feeling.

This will stop us from over-drinking, which can potentially be fatal and cause water intoxication (hyperhydration).

Dr Michael Farrell, an author of this study, said:

“If we just do what our body demands us to we’ll probably get it right – just drink according to thirst rather than an elaborate schedule.”

The study shows that after drinking excessive liquid, the brain activates a ‘swallowing inhibition’ mechanism to maintain regular amounts of water in the body.

These mechanisms’ are so efficient that they will naturally tell us how much we need to drink on a daily basis.

“Here for the first time we found effortfull swallowing after drinking excess water which meant they were having to overcome some sort of resistance.

This was compatible with our notion that the swallowing reflex becomes inhibited once enough water has been drunk.”

“There have been cases when athletes in marathons were told to load up with water and died, in certain circumstances, because they slavishly followed these recommendations and drank far in excess of need.”

Water intoxication or hyponatremia is caused by drinking high amounts of water.

It is a dangerous condition which abnormally reduces electrolytes, such as sodium levels in the blood, resulting in lethargy, nausea, seizure and even coma.

Dr Farrell, however, recommends that elderly people should watch their fluid intake, since they often don’t drink enough.

The study was published in the Proceedings of the National Academy of Sciences (Saker et al., 2016).